When we first met with the lovely owner of our Rapp Farm House, she emphasized wanting it to feel bright and cheerful and yet make sense with many of the rustic elements in her home. So as we began designing, the balance of rustic and bright and feminine became a consistent story line.

Plentiful windows overlooking fields and trees on the entire back of the house, meant there was plenty of light to play with lots of colors and patterns. Many rustic elements already dominated the newly constructed home: rustic beams and rough rock on the mantels, large hewn beams on the ceiling, and dark floors suggested that this home could easily become a cozy winter lodge. But that’s not where the client quite wanted it to go.

Navy blue with splashes of light blue and just a hint of fuchsia all on a palette of bright white felt just right lots of organic texture. We had to choose pieces that made sense with he rustic elements, yet were simple and brighter. The inlaid coffee table top contrasts strongly with the curvy-lined leopard print stools in playful navy. In a similar way, blue and white patterned textile art in a modern acrylic frame hanging over a rustic mantel beam expresses this home in a single moment.

The pillows became the stars of the show which allows the client to change things easily from season to season. Using a lot of navy and white allowed them to act as neutrals. It’s always fun when a simple switch of a few pillows- replacing the fuchsia with a caramel brown or adding in a hint of sky blue- can change the entire feel of the room for a budget-friendly price!

The dining room is nestled right next to the Great Room. Again, this room is blessed with abundant windows and lots of natural light. The client wanted the space to feel both casual and comfortable but feel more formal than the kitchen table nearby. Crisp white chairs with simplified backing designs and a warm linen cushion complimented yet defined the Great Room from the Dining Room well. Modern art of a rocky coast added a familiarity to the space while the large chandelier added drama and playful lines.

It’s always a joy to work on many joining rooms all at once. Time and again, we are able to create spaces that feel full, fresh, and welcoming. And that’s why I can’t wait to show you the rest of our beautiful Rapp Farm Blvd. home! There is so much left to share! 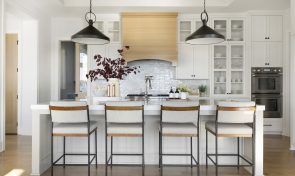 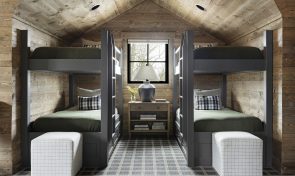 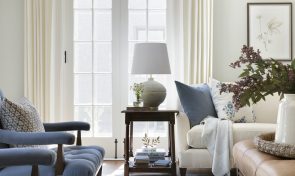 Arden Ave. Project Reveal
Back to Top
Join The List